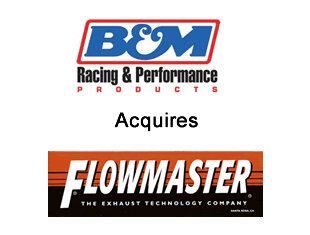 Earlier this week, B&M Automotive Group made the announcement that it had acquired Flowmaster Inc., and would be adding the exhaust company to its growing portfolio of performance aftermarket brands.
Most performance fans know B&M as the company that established itself back in the ’50s as one of the pioneers of high-performance automatic transmission components, during a time when drag racing with an automatic was nearly unthinkable. B&M’s modified GM Hydra-Matic transmissions—known as the Hydro-Stick—soon became a staple at strips across the country as they helped racers achieve optimum ET with reliability and repeatability. The company continued to advance with racing automatic transmission innovations, establishing itself as the source for high-performance automatic transmission hardware and developing shift-improver kits, high-stall torque converters, shifters and much more.
In 1983, Flowmaster brought its revolutionary mufflers to market, using a fully welded design that contained internal flow directors to quell noise via sound-wave technology, rather than with traditional packing material. The primary benefit was exceedingly high flow capability combined with street-legal sound levels; the trademark sound also appealed to performance fans, and Flowmaster’s mufflers quickly gained favor, leading to a broad array of variations along with a line of large-diameter, mandrel-bent exhaust pipe kits to complement the mufflers.

The B&M Performance Group announced earlier this week that it had acquired Flowmaster Inc., adding the exhaust technology company to its expanding portfolio of high-performance aftermarket holdings. Flowmaster’s operations will remain in place and product line growth has been forecasted.

The acquisition may surprise some performance enthusiasts, as Flowmaster is a sizable company that has long enjoyed healthy performance, but it seems that the timing for both companies was opportune. B&M has grown into the B&M Automotive Group in recent years through a series of acquisitions, including Hurst Shifters, followed by the former Classic Motorsports Group, which was then used to launch Hurst Drive Line Conversions, providing kits and components to convert vintage performance cars to modern five- and six-speed manual transmissions. Meanwhile, Flowmaster had still been headed by some of its original founders, who seem to have been interested in reducing their involvement with the business.

Both companies are based in California, though Flowmaster is up north in Santa Rosa, with manufacturing facilities in Sacramento, while B&M is based in Southern California’s San Fernando Valley. However, word is that Flowmaster’s operations will remain where they are; no significant staffing changes have been cited as part of the plan.

Word from insiders at Flowmaster has been positive, with optimism for the opportunities that should be enabled by the increased resources that are expected as the company becomes part of a larger organization. Even prior to the acquisition, Flowmaster had recently been expanding its line with a growing number of applications in stainless steel, kits for new models from the OE manufacturers and broadening of the Hushpower line; we’ve been advised that further product line growth is imminent, now that the acquisition has been finalized.

Flowmaster established itself in the early ’80s with an unconventional approach to performance muffler construction, using fully welded cases containing specifically engineered chambers to quell sound, rather than conventional packing.